Utah wildfire may rage all summer

Fire authorities in Utah let a wildfire that has killed three people and charred 62 square miles (160 sq. kilometers) continue burning to clear out dead trees in a national forest. 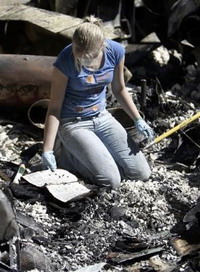 Utah wildfire may rage all summer

Some small communities in the area of northeastern Utah still were under a mandatory evacuation.

"We might have fire out there on that mountain this whole summer," said Kim Martin, incident commander.

Since Friday, when three people were killed, the fire has burned nearly 40,000 acres (16,188 hectares), about one-third in the Ashley National Forest and the rest on private and public land and the Uintah and Ouray Indian reservations.

The fire is burning about 100 miles (160 kilometers) east of Salt Lake City, and officials said Monday evening that it was about 10 percent contained.

Utah Governor Jon Huntsman toured the fire Tuesday and said he was pleased with the progress made in protecting homes.

"We've had a difficult and a traumatic few days," he told reporters. "Some states get hurricanes, some get tornadoes. We get wildfires, and they are no different in terms of devastating consequences."

Parts of the forest and several roads leading to the fire were closed to the public. It is unclear how many buildings have burned, and the cause of the fire was still under investigation.

Low humidity and temperatures in the 90s (30s Celsius) that have helped the fire grow were expected to remain throughout the week.