Katie Holmes, Rosie O'Donnell and Anna Nicole Smith's baby daughter, Dannielynn, are among those who got on OK! magazine's list of "most influential" celebrities. 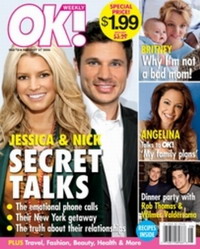 The list of 19 famous faces, which appears in the magazine's latest issue, on newsstands Friday, was separated by editors into six categories: beauty queens, style setters, entertainers, newsmakers, survivors and body shapers.

OK! named Holmes, the 28-year-old wife of Tom Cruise and mother of their 1-year-old daughter, Suri, a beauty queen because of her "refreshing girl-next-door look" and sporty cropped haircut. Beyonce and Jennifer Lopez also made the cut.

O'Donnell, who brought ratings and controversy during her tumultuous tenure on ABC's "The View," made the list of newsmakers, as did Hollywood supercouple Brad Pitt and Angelina Jolie and "Grey's Anatomy" star T.R. Knight. Knight announced he was gay after it surfaced that Isaiah Washington had used an anti-gay slur against him during an on-set clash with a co-star.

The youngest celebrity on the list: 10-month-old Dannielynn Hope, who was recognized as a survivor because she has been "at the center of Hollywood's most controversial tragedies," the magazine said. Her mother, Anna Nicole Smith, died in Florida in February. A bitter paternity dispute between Howard K. Stern and Larry Birkhead was put to rest months later when Birkhead showed he was Dannielynn's father.

The top three entertainers - the "people who decide what we watch and listen to," according to OK! - were "American Idol" judge Simon Cowell, Carrie Underwood and model-TV host Heidi Klum.

Tyra Banks was among the "body shapers" who influence notions of body image. Banks, who was called fat after she was photographed on the beach, later appeared on her syndicated TV talk show in a bathing suit.

Sarah Jessica Parker, Justin Timberlake and Kate Moss were named the most prominent trendsetters in fashion.