Former Israel president insists to be victim of false allegations

Disgraced former President Moshe Katsav insisted that he was the victim of a "campaign of incitement" and "false allegations" in his first public comments . 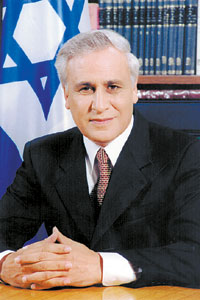 Former Israel president insists to be victim of false allegations

In a preview from an interview with Channel 2 TV to be aired later in the day, Katsav said he and his family have been devastated by a scandal that has wronged them. Katsav showed no signs of remorse in the excerpt.

Although he agreed to the plea deal on Thursday, an outraged public is not letting him off so easily: Israel's Supreme Court has put the agreement on hold, ordering the state to explain why it backed off from planned rape charges.

"Ninety percent of the allegations were thrown in the trash and that doesn't interest anybody," Katsav said. "This alone indicates the magnitude of the campaign of incitement and unconscionable ease with which libel and false allegations can be uttered, causing a man and his family to crash. It is very troublesome."

Four women who worked for Katsav charged that he repeatedly fondled them, kissed them, exposed himself to them and in two cases raped them while he served as president and earlier, as tourism minister. The allegations roiled the country by portraying the man who was supposed to be Israel's moral compass as a predatory boss who forced sexual favors from female employees.

Attorney General Meni Mazuz's decision to go for a plea deal rather than rape charges touched off a public outcry, with critics charging that assaulted women would be discouraged from stepping forward, while Katsav would be allowed to fade quietly away.

About 20,000 Israelis protested Mazuz's decision at a demonstration Saturday in Tel Aviv.

As part of the bargain, Katsav stepped down as Israel's president on Sunday, two weeks before his term was to expire.