The leading U.S. airlines urged the Federal Aviation Administration on Monday to impose delays on flights by corporate and private jets thus relieving the congestion at New York airports over the Fourth of July holiday. 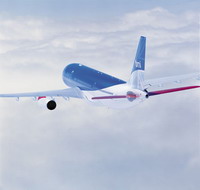 Delays that stem from congestion in New York can have ripple effects throughout the United States, particularly along the East Coast.

That view was strongly disputed by the National Business Aviation Association, which represents 8,000 companies and other operators of private aircraft.

"The FAA is not playing favorites," said Steve Brown, a senior vice president at NBAA. The agency does delay private flights due to heavy air traffic or threatening weather, he said.

In addition, private jets are not the cause of late commercial flights, he added. The primary culprits are weather, shortages of flight crews and other factors, he said.

The ATA's complaint comes as New York City airports have had a difficult time with delayed and canceled flights this year.

Between January and April, 38 percent of all flights at Newark Liberty, Kennedy and LaGuardia were either late or canceled, according to federal statistics.

More than one-third of all air traffic delays in the country on June 28 were in New York City airspace, May said. Other ATA members include Southwest Airlines Co., Continental Airlines Inc. and Delta Air Lines Inc.

Laura Brown, a spokeswoman for the FAA, said the agency would consider the ATA's proposal, "but there are a bunch of things we're doing to relieve air congestion" in the New York City area.

The agency is in the process of redesigning flight routes in the region to relieve congestion, Brown said.

In addition, the agency is also implementing new software that will reduce the number of flights delayed or redirected by bad weather, she said. The software will more accurately target planes that are heading toward bad weather, she said, and will be used for both private and commercial flights.

The airlines and FAA, meanwhile, are pushing Congress to authorize a multibillion-dollar upgrade of the nation's air traffic control system. The system still uses analog radar technology from the 1950s, according to ATA spokeswoman Victoria Day.

A modern replacement would use global-positioning satellites to more accurately coordinate traffic, allowing aircraft to fly closer together.