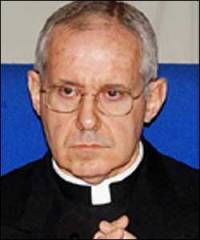 A year after Pope Benedict XVI restored an office that had specialized in relations with Muslims, he restored it and named a former Vatican foreign minister to head it.

The appointment of French Cardinal Jean-Louis Tauran, the Vatican's foreign affairs chief from 1990 to 2003 as president of the Pontifical Council for Interreligious Dialogue, raised the office's profile.

Tauran was one of the strongest Vatican opponents of U.S. plans to invade Iraq, saying a unilateral military strike would be a "crime against peace" with no justification on grounds of self-defense.

The Vatican secretary of state, Cardinal Tarcisio Bertone, had recently announced the office would be reopened, saying it showed the importance the Vatican attached to dialogue with other religions.

The office had previously been headed by English Archbishop Michael Fitzgerald - considered a top Islamic expert - who was sent to Egypt as papal envoy.

When Benedict announced in early 2006 he was transferring Fitzgerald and merging his office with the Vatican's office for culture, some analysts worried that the Vatican would be left without a resident expert in Muslim affairs at a critical time.

Church relations with Muslims were badly strained after a speech by Benedict in Germany in September that linked Islam to violence. Benedict said he regretted that Muslims were offended by his remarks.