Fiji's military ruler: Elections to restore democracy could be held in early 2009

The military leader who seized power in Fiji in December said Tuesday he tentatively agrees that elections could be held earlier than previously planned, a concession to nations pushing for a swift return to democracy. 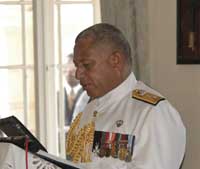 Fiji's military ruler: Elections to restore democracy could be held in early 2009

But Commodore Frank Bainimarama warned that sanctions imposed by foreign governments have sent his country's economy spiraling downward, and this is threatening to hobble progress toward elections.

The European Union has threatened to cut subsidies supporting Fiji's key sugar industry if Bainimarama does not move faster to restore democracy. Australia, New Zealand and the United States have also imposed sanctions and are putting pressure on the regime.

Bainimarama said his military-appointed Cabinet agreed Tuesday that elections could be held in early 2009, 15 months ahead of an earlier projection.

"Cabinet has ... agreed in principle that a parliamentary election in Fiji could be held in the first quarter of 2009," Bainimarama said in a statement.

The announcement came in response to a report written for the 16-member South Pacific Forum, the region's main diplomatic and economic bloc, that concluded that elections could be held as early as December next year or early in 2009.

Bainimarama, who ousted the elected government in a Dec. 5 coup, has insisted that he needs time to root out corruption from the bureaucracy and undertake a census and electoral reform before elections can be held. He had previously set mid-2010 as a likely date.

Pressure on Bainimarama's regime ramped up last week, after he expelled New Zealand's top diplomat alleging he was interfering in Fiji's internal affairs.

The move was condemned internationally, and New Zealand has promised to strengthen sanctions that already include cutting aid delivered through the government and defense links.

Bainimarama said Tuesday that New Zealand, Australia and the EU should now normalize their relations with his regime and help the country get back on its feet.

"If our economy continues on a downward spiral, how can Fiji be expected to return to parliamentary democracy sooner rather than later?" he said.

Fiji's tourism- and sugar-dependent economy has plummeted since the coup, and Bainimarama has said crime is rising.

Bainimarama blamed international critics for instilling fear that is keeping potential investors and tourists away.

Critics say it is Bainimarama's coup that has caused uncertainty that has harmed the economy.

Australian Foreign Minister Alexander Downer described the announcement of a potential election in early 2009 as "encouraging."

"Australia is willing to assist Fiji with technical and financial support for an election provided there is a serious and demonstrated commitment by the Fiji authorities to hold elections in accordance with the timetable indicated," Downer said in a statement.

New Zealand Prime Minister Helen Clark said the statement was "a first step - the question is what follows ... what the next benchmarks and steps are."