CIA has secret prisons in Poland and Romania

The CIA ran secret prisons in Poland and Romania to interrogate key terror suspects, "black sites" where ghost prisoners were typically shackled and handcuffed, kept naked and in isolation. 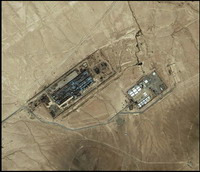 CIA has secret prisons in Poland and Romania

The CIA, while stopping short of a denial, said the report was "distorted." Poland and Romania vehemently denied the charges.

Top al-Qaida suspects like Abu Zubaydah and Khalid Sheikh Mohammed were held in Poland, along with other "High Value Detainees," said the report by Dick Marty, a Swiss senator and former prosecutor tasked by the Council of Europe, a human rights watchdog, to investigate CIA activities after reports of secret prisons emerged in 2005.

The report claimed that top Polish and Romanian officials were aware of the clandestine operation - fully run by the CIA. Romania took a lesser tier of detainees of nevertheless "remarkable importance," said Marty.

The prisons formed the center of a "spider's web" of human rights abuses described in an initial report by Marty. Issued one year ago, it focused on flights to spirit detainees to CIA hideouts with landing points in at least 14 nations. The latest report focuses on the prisons themselves, while providing new data on "disguised" flights.

"While it is likely that very few people in the countries concerned, including in the governments themselves, knew of the existence of the centers, we have sufficient grounds to declare that the highest state authorities were aware of the CIA's illegal activities on their territories," the report said.

Marty did not rule out other such CIA prisons in Europe but told reporters he did not include this in his report because his sourcing was insufficient.

The report said its conclusions rely upon "multiple sources which validate and corroborate one another." Marty said his team spoke with, interviewing in many cases, "over 30 one-time members (serving, retired or having carried out contract work) of intelligence services in the United States and Europe."

While conceding at a news conference that sources for the report were "limited," Marty said they also were "well placed" and "know (of the operation) because they must know. They were implicated."

Polish Foreign Ministry spokesman Robert Szaniawski said Marty did not offer "any concrete proof." "There were no secret prisons in Poland," he said.

Jerzy Szmajdzinski, Poland's defense minister from 2001-2005, dismissed the report as "political fiction," sarcastically saying: "Of course, I organized everything and gave them a red-carpet welcome."

Former Romanian President Ion Iliescu, mentioned in the report among a list of ranking officials with knowledge of the prisons, dismissed the report as "stupid."

The report provided graphic descriptions ofprison conditions, based, it said, on testimony of detainees, human rights advocates or people involved in the operation.

The composite picture described prisoners kept naked for weeks, sometimes attached to a "shackling ring" in cells. Bucket served as toilets. Masked guards who never spoke were the only contact of those consigned to four-month isolation regimes.

Cells, sometimes equipped with video cameras, were cramped with extremely hot or cold air piped in, along with irritating noises, including "torture music," rock or rap blasted into the cell, and "distorted" verses of the Muslim holy book, the report said.

Clandestine prisons and CIA flights via or from Europe to countries where suspects could face torture would breach the continent's human rights treaties, including the European Convention on Human Rights.

The Council of Europe has no power to punish countries for breaching the treaty other than terminating their membership in the 47- member state organization. The Council was set up by European governments four years after World War II to promote democracy, human rights and the rule of law in Europe. Based in Strasbourg, France, it is separate from the 27-nation European Union.

Marty said he sees his reports as a "dynamic of truth" and hopes they will stir debate over what he says are blatant rights abuses.

U.S. President George W. Bush acknowledged the CIA's secret detention program in September 2006, when he announced that the agency had moved al-Qaida operational planner Sheikh Mohammed and 13 other suspected terrorists to Guantanamo Bay.

Szymany, in Poland, served as the drop-off point, where at least 10 secret flights - six coming from Kabul, Afghanistan - landed.

On Romania's role, the report claims the United States lured the east European country into cooperating with "formidable" support for Romanian accession to NATO - the "biggest prize."

The entire program took place in the framework of NATO's security policy, the investigator contended. Marty said the prisons grew out of a secret pact within NATO shortly after the Sept. 11 attacks.

The pacts "allowed the CIA to be able to move around Europe unobstructed, without undergoing any control and, especially, the NATO protocol on secrecy was applied," Marty said.

His report raised the possibility that the island-terrority of Diego Garcia was used as a "processing" center for detainees and that Thailand served as the first CIA "black site" where Abu Zubaydah may have been held after his 2002 capture.

However, such information, while "sufficiently serious" like the possibility of other European "black sites," needs further investigation, the report said.