Leaders of the Group of Eight are hopeful that the stalled Doha round of global trade talks could be wrapped up by the end of the year, according to the United States delegation and a final communique. 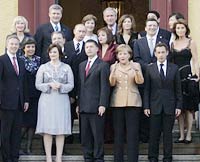 In a statement released on the final day of the G-8 Summit, the White House said the G-8 had called on members of the World Trade Organization to show flexibility to resume the talks and find common ground.

"The G-8 called on all WTO members to demonstrate the flexibility needed to conclude the negotiations by the end of 2007 and reiterated the importance of trade capacity building in helping developing countries best take advantage of new opportunities resulting from trade liberalization," the White House said in a statement released to reporters.

The Doha talks have been nearly dormant since last year while nations have argued over industrial and agriculture tariffs and farm subsidies.

Trade officials say they need agreement on the framework of a deal by the end of July to set aside enough time for the technical work needed to salvage a deal by December, already three years behind schedule. Failure over the next seven weeks could set the whole process back until 2010, as subsidy and tariff concessions are generally seen as unlikely in 2008, when U.S. elections will be held, and 2009, when Indian elections are scheduled.

A new offer on manufactured goods Friday at the Geneva-based WTO underscored how little progress has been made in that negotiation over the last twelve months.

The proposal by Brazil, India and other emerging economies repeats the same figures for cutting tariffs on industrial products that have been roundly rejected by the United States, European Union and others since being offered last June.

The document, obtained by The Associated Press, criticized rich countries for making only modest concessions in exchange for the "exaggerated demands they are requiring from developing countries."

The talks have stumbled repeatedly since their inception six years ago in Qatar's capital, largely because of wrangling between rich and poor countries over eliminating barriers to farm trade. The impasse on agriculture has led to only halting progress in negotiations on manufactured products, which comprise the vast majority of goods trade internationally.

Last month, WTO director-general Pascal Lamy said it "remains to be seen" whether Brazil, China, India and other developing countries would have to allow for any real opening of their industrial markets, in exchange for the significant cuts in farm subsidies and tariffs they are demanding from richer economies. The U.S., the 27-nation EU and Japan have all refused to budge from their agriculture positions, citing a lack of progress in the manufacturing talks.

At the G-8 summit last year in Russia, the world's most powerful political leaders made a similar, but fruitless, appeal for new momentum in the talks. The entire process came to a halt only a week later after a series of acrimonious meetings involving top commercial powers.

In a political declaration released Thursday, the G-8 reaffirmed its commitment to cutting barriers to trade in environmental goods through the Doha round. It is expected to say so again when its final communique is released later Friday.

"If you're interested in alleviating poverty around the world, then they ought to be joining and making the necessary concessions to have a global trading system that helps affect the poor," he said Thursday.

But persuading a skeptical U.S. Congress that a final deal makes sense for Americans is paramount for the success of the talks, because Bush's authority to send trade deals to Congress for a simple yes-or-note vote without amendments expires at the end of the month.

As "fast-track" renewal is not on the congressional agenda, Congress will soon be able to pick any agreement apart line by line, making it more difficult for the Bush administration to offer trade concessions and meaning the U.S. may be forced to repeatedly reopen negotiations with the WTO's other 149 members.