Hundreds of Nepalese women have been training to become the first female Gurkha soldiers to serve in the British army, hoping to join their male counterparts famed for being fearsome fighters, officials said Friday. 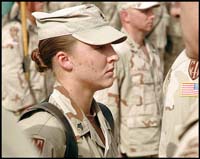 A military official at the British Embassy in the Nepalese capital, Katmandu said about 40 women would be hired later this year as part of a pilot project, with some to eventually become official army recruits.

The formal and regular recruitment of female soldiers would begin in 2009, said the official, who did not want to be identified discussing government policy.

"The pilot scheme would be fact-finding activity to inform us so we can put place proper recruitment procedures in place," the official said.

Since news of the change in recruitment policy was first made public last month, about 600 women have been meeting in the midwestern resort town of Pokhara, where they have received private training from former Gurkha soldiers. Pokhara is about 200 kilometers (125 miles) west of Katmandu.

About 230 Gurkha men are recruited into the British army ever year, but the official said it was too early to say how many women would join.

"More and more women are joining the private training program. We are happy that women would be allowed to get the same opportunity as men," said Yam Bahadur Gurung, a retired soldier.

Rajita Gurung, 17, said part of the attraction of joining the British army was the salary.

"My life and my career will be made if I am recruited in the British army," she said. "Working will be much better than at home."

Gurkhas began serving the United Kingdom in 1815 in India, and with Indian independence in 1947 became part of the British army. Nearly 3,400 serve now, and in recent years they have taken part in British operations in Iraq and Afghanistan.

"We have finally been provided with an equal opportunity. It is a historic moment for us women," said Amrita Ghimire, another trainee hoping to join the Gurkha ranks.