I. Lewis "Scooter" Libby, once the top aide to Vice President Dick Cheney, sought leniency as he prepared to be sentenced for perjury and obstruction of justice. 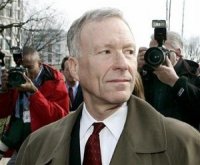 Libby is the highest-ranking official convicted of a crime since the Iran-Contra affair in the 1980s.

"No one was ever charged. Nobody ever pleaded guilty," attorney William Jeffress said. "The government did not establish the existence of an offense."

U.S. District Judge Reggie B. Walton was skeptical. By that reasoning, Walton said, witnesses benefit if they aggressively obstruct investigations so prosecutors cannot make their cases.

Libby was to have the opportunity to speak publicly about the charges later in the day. He has not discussed the case since his 2005 indictment. Throughout his monthlong trial, and following his conviction in March, he always let his lawyers do the talking.

Defense attorneys have not said whether Libby would speak. It's a delicate decision, one made more difficult because Libby has maintained his innocence and is appealing his conviction.

"The only thing any sentencing judge wants to hear is remorse, and if they don't think it comes from the heart or they think they're only sorry for getting caught, for losing their job, or for going to jail, it doesn't count," said Hugh Keefe, a Connecticut defense attorney who teaches trial advocacy at Yale University.

Libby was convicted of lying to investigators about what he told reporters regarding CIA operative Valerie Plame, whose identity was leaked to reporters in 2003 after her husband began criticizing the Bush administration's war policies.

He cannot offer too much of an apology, however, without jeopardizing his appeal. A general apology, one in which Libby expresses regret for the drawn-out litigation and the pain he has caused his family, leaves him exposed to another Fitzgerald attack for not showing genuine remorse.

"The alternative is, you risk just sitting there silent. What's the judge's reaction to that going to be?" said Michael E. Horowitz, a Washington defense attorney and former Justice Department official.

"When they elected me as the governor of this state, they expected better, and I let 'em down, and for that I apologize," Ryan said before a judge sentenced him to 6Ѕ years in prison.

Former Atlanta mayor Bill Campbell said nothing at his sentencing for tax evasion last year and was ordered to spend 2Ѕ years in prison. Former Enron CEO Jeffrey Skilling declared "I am innocent of these charges," before being sentenced to 24 years in prison for corporate fraud.

Walton has a reputation as a tough judge. If he sends Libby to prison, he must decide whether to put that sentence on hold while the appeal plays out.

If Walton should grant such a delay, it would give Bush more time to consider a pardon for Libby.

The president has said he is going to stay out of it until the legal case is over, a decision that is harder if his former aide is headed to prison.