Iranian president: it's 'too late' to stop nuclear program¤ 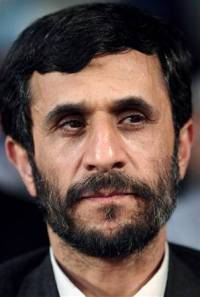 Iranian president: it's 'too late' to stop nuclear program¤

It is “too late” to stop Iran’s nuclear program and the U.S. with its allies should not to push for new U.N. sanctions on Iran, hard-line Mahmoud Ahmadinejad said Tuesday, comparing Iran to a lion sitting quietly in a corner.

"We advise them not to play with the lion's tail," Ahmadinejad said, prompting applause from a room of reporters, Iranian officials and foreign dignitaries at a Tehran news conference.

"It is too late to stop the progress of Iran," Ahmadinejad said. "Iran has passed the point where they wanted Iran to stop."

The U.N. Security Council is preparing to debate a third set of sanctions against the Islamic Republic in response to Tehran's continuing refusal to suspend uranium enrichment, which can produce fuel for civilian energy or fissile material for a bomb.

Addressing the West, Ahmadinejad said that a third round of sanctions will only "make things harder for you and distances you from resolving the issue ... We advise them to give up stubbornness and childish games."

The Security Council first imposed sanctions on Iran in December and modestly increased them in March over Iran's refusal to suspend enrichment. Iran says it is within its rights to pursue uranium enrichment for peaceful purposes.

The country's nuclear negotiator, Ali Larijani, said this week that Iran's disputes over its nuclear program could be settled in the coming weeks if the U.N. Security Council drops preparations to debate the third round of sanctions.

The president's press conference was his first since talks between U.S. and Iranian diplomats in Baghdad on May 28 - the first public talks between the two countries in nearly three decades. The two sides are supposed to meet again in less than a month.

Ahmadinejad scoffed at U.S. accusations that Iranian agents were helping fellow Shiite militants in Iraq, but said that Tehran still wanted to help calm the violence there.

"The occupiers of Iraq ... have lost the way, they don't know what to do. They imagine that by accusing others, they can resolve problems."

"Now, they said help us," Ahmadinejad said, in an apparent reference to the U.S. invitation for the Baghdad talks. "We are prepared, for the sake of the Iraqi people, to help. We won't spare any efforts."

Iranians have largely hailed the talks, although the state television quoted Ahmadinejad as saying Iran only agreed to them after the U.S. asked Iran 40 times and sent a formal diplomatic note.