A Louisiana judge dismissed a request to dismiss homicide charges against the owners of a suburban New Orleans nursing home where 35 residents died during Hurricane Katrina. 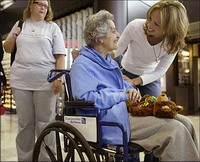 Defense attorneys had argued for the dismissal, saying the state attorney general, in another action, blamed the U.S. government for the post-storm flooding and the resulting deaths in 2005, and therefore could not blame the nursing home operators.

The husband-and-wife team of Salvador and Mabel Mangano face 35 counts of negligent homicide for deaths at their St. Rita Nursing Home - a case investigated and brought by Louisiana Attorney General Charles Foti.

But Foti also has filed a $200 billion (148.8 billion EUR) claim against the U.S. Army Corps of Engineers, saying the collapse of faulty levees caused floods that inundated the New Orleans area.

The Manganos for 20 years had kept residents in their nursing home without a problem, defense attorney James Cobb said Thursday.

But after Katrina stuck, the building flooded to the ceiling, he said.

Each count of negligent homicide carries a sentence of up to five years in prison and a $5,000 (3,721.35 EUR) fine. The state previously dismissed 35 counts of cruelty to the infirm against the couple.