The countdown is on for Paris Hilton, who has to report to jail by June 5 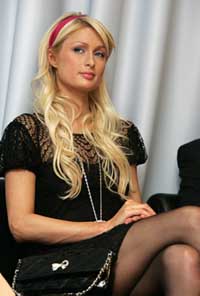 The countdown is on for Paris Hilton, who has to report to jail by June 5

The 26-year-old heiress has until 11:59 p.m. on June 5 to report to the Century Regional Detention Facility to start serving time for violating her probation in an alcohol-related reckless driving case.

A judge sentenced Hilton to 45 days behind bars, but Los Angeles County sheriff's spokesman Steve Whitmore said "she will do about 23 days," regardless of when she reports. She may choose to report early, or at an odd hour, to try to avoid media attention.

"It's the state law," he said, explaining the "good time/work time" requirement in which "you get days off for every day that you serve."

He said there is no chance Hilton will be released early due to overcrowding, as actress Michelle Rodriguez was in May 2006, when she served less than one day of a 60-day sentence at the same county jail.

"The situation in the jail will not determine (Hilton's) release," Whitmore said. "She has been given a full sentence. She will do her full sentence."

The 13-year-old Lynwood jail, located five miles (8 kilometers) south of downtown Los Angeles, has been an all-female facility since March 2006. The two-story concrete building sits in an industrial neighborhood, beside train tracks and beneath a bustling freeway.

Hilton will be housed in the facility's "special needs" unit, where she "very well may not" have a roommate, Whitmore said.

Like other inmates in the special-needs area, she will take her meals in her cell and will be allowed outside the for at least an hour each day to shower, watch TV in the day room, participate in outdoor recreation or talk on the telephone. She will have to use a public pay phone - cell phones and BlackBerrys are not allowed.

Hilton must come empty-handed to the jail, Whitmore said. Once she is booked into custody, she will have to surrender her clothing and jewelry in exchange for the requisite orange jumpsuit.

She will also get the same standard-issue kit all incoming inmates at the 2,200-bed facility receive: a toothbrush, tube of toothpaste, soap, a comb, deodorant, shampoo and shaving implements, along with a jail-issued pencil, stationary, envelopes and stamps.

If Hilton wants to prettify herself in her cell's polished-metal mirror, she can buy a compact, eye shadow, an eyebrow pencil and package of hair coloring from the jail commissary, where she can draw from a prepaid account.

Inmates are also allowed to have up to three books and magazines each week and a maximum of five photographs - no larger than 4-by-6 inches (10 by 15 centimeters).

No special arrangements have been made to accommodate the heiress, Whitmore said.

"The sheriff treats all inmates alike," he said.

But Nicole Richie, Hilton's on-again friend and reality-show co-star, had a different opinion when she spoke to Ryan Seacrest on his morning radio show Wednesday.

"The way that Paris' whole entire case was dealt with was, A, out of her control but B, really unfair," Richie said. "Sometimes people just get exploited so I can only hope that does not happen to me."

Richie was charged with driving under the influence and pleaded not guilty in February, and is awaiting the resolution of that case. She was previously convicted of DUI in June 2003.

Besides starring in "The Simple Life," Hilton is an aspiring pop singer who released her debut CD in August. She also has a namesake perfume and handbag collection.