Top court in India wants to punish students for bullying

India's top court ordered the government to treat hazing in colleges and universities as a crime, and to punish any offenders. 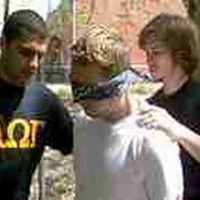 Top court in India wants to punish students for bullying

The Supreme Court said the government must amend the laws to provide for speedy trials in hazing cases, the Press Trust of India news agency reported.

Hazing - an often humiliating, sometimes dangerous initiation ritual - is common in Indian colleges and universities, but in recent years it has created an environment of fear, the court said, according to PTI.

Most often, students in their freshman year complain of being forced to do petty work for seniors, including academic assignments, laundry, cleaning, and running errands.

But hazing in India sometimes involves violence, ranging from incessant slapping to attacks with rods and hockey sticks.

Under existing but rarely enforced laws, an offender can be jailed for a maximum of two years.