Gamal Mubarak has no intention to rule Egypt

The youngest son of Egypt's ruler who is to succeed his father insisted Tuesday that he had no plans to become president. 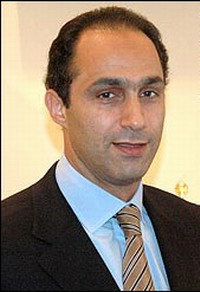 Gamal Mubarak has no intention to rule Egypt

"I said before and I am repeating it again, the intention and ambition to run for president doesn't exist," Gamal Mubarak, 43, told the private-owned Arabic satellite TV channel, Orbit.

The rare interview comes three days after Mubarak was married to Khadija, 24, the daughter of wealthy businessman. Many Egyptians suspect that the marriage is part of an elaborate plan to have Gamal succeed his father, President Hosni Mubarak. The family denies such plans.

Gamal, who was wearing a gold band on his left ring finger during the interview, said family and friends would gather Friday at the Red Sea resort of Sharm el-Sheikh for a wedding reception to celebrate his marriage. The religious ceremony took place Saturday, he said.

The reception coincides with an international conference on Iraq that will bring together Mideast and other world leaders, also to be held in Sharm el-Sheikh, and falls on the elder Mubarak's 79th birthday.

Gamal has risen swiftly to become the most powerful figure in Egypt's ruling party, leading a program of economic liberalization.

But the opposition says the government's controversial democratic reforms, including changes to the constitution last month, have served to pave the way for Gamal to step in to succeed his father.

When asked if he would accept the nomination for presidency if it was offered from the ruling National Democratic Party Gamal said: "As long as you don't have the desire, whatever the party says" doesn't matter.

"I'm not looking for any executive post," he said, adding that he was not interesting in leading the NDP or any other political parties.