Turkey's Islamic-rooted government fired back at the military on Saturday saying an army statement expressing concern over presidential elections was not acceptable in a democracy. 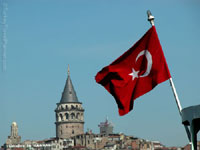 In a statement posted on its Web site late Friday, the powerful pro-secular military said it was monitoring the elections with concern and indicated it was willing to become more openly involved in the process. Analysts said the statement was an ultimatum to the government.

"According to our Constitution, the military chief of staff is responsible to the prime minister," Cicek said.

Hours before the military issued the statement, Prime Minister Recep Tayyip Erdogan's presidential candidate - Foreign Minister Abdullah Gul - failed to win enough votes in a first round of voting in Parliament that has been marked by tensions between Erdogan's government and the defenders of Turkey's secular ideals.

Opposition lawmakers appealed the election in the Constitutional Court on a technicality and have called for early elections as the only way out of the impasse.

Cicek said the military statement, which was issued late Friday after the opposition's appeal, appeared to be an attempt to influence the court.