141 illegal immigrants, most from Iraq, were detained and rescued from a boat stranded near Athens on Thursday. 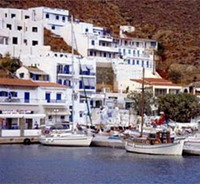 The immigrants were given medical checks at a hospital in Lavrion, 55 kilometers (35 miles) southeast of Athens, before being taken to state-run hostels, the ministry said. One immigrant was later hospitalized with a fever.

Authorities initially had estimated that some 200 people were on the stranded vessel, which was tugged to the port of Lavrion. The rescue operation involved navy vessels and helicopters.

Port officials said there were 13 women and 15 children among the rescued immigrants, who had traveled in a 27-meter (90-foot) fishing boat from the coast of Turkey.

Greece is a busy transit point for human trafficking, with many illegal immigrants seeking access to European Union countries.