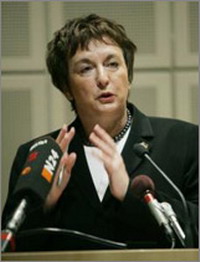 Three Baltic nations decided that Stalin’s atrocities should be considered in plans of EU to make racism incitements and Holocaust denial a crime.

Lithuania, Estonia and Latvia demanded that a meeting of EU justice and interior ministers agree to make it illegal for people to publicly condone, deny or trivialize crimes against humanity committed under the Soviet regime led by Joseph Stalin.

"Stalinism and Nazism should be treated equally," said Jurgita Apanaviciute, a spokeswoman for Lithuania's delegation to the EU.

The EU ministers were close to agreeing on the contentious anti-racist package after six years of negotiations on how to combat racism and hate crimes.

But other EU nations were loathe to agree to the demand by the Baltic states because they do not legally recognize crimes committed under Stalin as hate crimes or equate them with the genocide perpetrated under the Nazis in Germany during World War II.

Although seen in the West and by many Russians as a tyrant responsible for the deaths of tens of millions of his own people, Stalin is also revered as a powerful leader who made the country a 20th century industrial giant and led it to victory over the Nazis.

Diplomats said the EU-wide rules, which will set only minimum standards to fight racism and xenophobia, would only recognize officially recognized genocides under statutes of the International Criminal Court.

Memories of repression under Stalin in the Baltics, remain fresh there, and heavy public pressure exists pushing the three nations to make crimes committed under Stalin's rule there a crime.

Anti-racist groups fear EU ministers will agree to a watered down agreement, which will do little to address racism and xenophobia in Europe.

They claim vague terms in the proposal and weak jail terms will do little to take a firm stand against anti-Semitism and other racist incitement.

German Justice Minister Brigitte Zypries, whose country holds the EU presidency, restarted efforts to get a compromise on the new rules to combat racism and hate crimes in January.

Zypries rejected criticism that the rules would do little to address racism.

"I believe it is important to show that we don't want things like this in Europe," Zypries said. "We protect people and we will not allow them to be discriminated against or, worse, become victims of violence on grounds of race or religion."

Agreement on a deal has been difficult amid vastly different legal and cultural traditions in each of the 27 EU member states of how they combat racism and xenophobia, and notably on whether all EU nations should impose criminal penalties against those denying the Holocaust or other genocides.

The proposed rules calls for EU governments to impose up to three-year prison sentences for those convicted of denying genocide such as the mass killing of Jews during World War II and the massacre in Rwanda in the 1994.

Efforts two years ago to set minimum jail terms ended in failure. Several countries, including Britain, Italy and Denmark, were reluctant to sign up to the measures because they feared the EU measures could overstep the right to expression protected under their countries' laws.

The latest plan however was watered down, offering numerous opt-outs of certain aspects of the EU-wide rules.

The proposal calls on EU nations to punish those who publicly incite violence or hatred based on a person or group's race, color, religion, descent or ethnic origin.

More contentious aspects of the draft rules require member states to criminalize those "publicly condoning, denying or grossly trivializing ... crimes of genocide, crimes against humanity and war crimes," as listed and defined by the International Criminal Court.

However, member states may opt out of the requirement to criminalize those who deny the Holocaust or other genocide if such rules do not exist under their national laws, according to the EU proposals.

Opt-outs also are foreseen for racist remarks based on religious grounds and on Nazi symbols, like the swastika.

Many EU nations already ban denials of the Holocaust, including Germany, France, Spain, Austria and Belgium.