10 members of the banned Muslim Brotherhood group were detained by the Police as part of Egypt's ongoing campaign against the country's strongest opposition group. 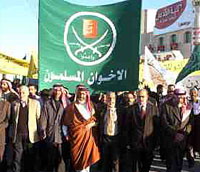 Nine members of the group were rounded up late Thursday as they were holding a meeting inside an apartment owned by a member of the group in the northern city of Behira, said the police official, who spoke on condition of anonymity because he was not authorized to speak to the press.

Those arrested included a businessmen and senior local leaders of the group in Behira, located about 180 kilometers (112 miles) north of Cairo, according to a statement posted on the Brotherhood's Web site.

The police official also said Abdel Moneim Mahmoud, a young media coordinator of the group, was arrested in Cairo on Thursday.

The arrests were the first since the referendum on controversial constitutional amendments, which the Brotherhood and other Egyptian opposition groups boycotted.

The amendments, the largest since the constitution was drafted in 1971, carried new restrictions on civil liberties and was seen as aiming at deterring the Brotherhood from being recognized as a legal political player.

Authorities initially intensified their campaign against the Brotherhood after student members of the group staged a militia-style demonstration at Al-Azhar University in Cairo in December, stoking government fears the group was forming a military wing. The group denied this, saying the new campaign was a reaction to their opposition to the constitutional amendments.

In early February, Mubarak also ordered 40 other Brotherhood members - including its top financial figure, Khayrat el-Shater - put on trial before a military court on charges of money laundering and terrorism.

The movement, banned since 1954, is Egypt's largest Islamic opposition group. Its lawmakers, who run as independents, currently hold 88 seats in the 454-seat parliament.