It is needless to delay potential cures and treatments for a number of diseases as a result of U.S. restrictions on stem cell research. 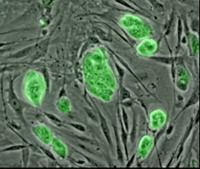 Because of the limits in the United States, Chi Dang, vice dean for research at Johns Hopkins, said foreign institutions are dangling carrots in front of colleagues to lure them away and the carrots "are platinum coated."

Dang is among a number of researchers on hand Tuesday as Sen. Barbara Mikulski, a Democrat, visited Johns Hopkins Hospital in Baltimore in support of the bill that would give scientists access to stem cell lines that are currently off-limits to federal funding.

The House passed the bill earlier in the year, and Senate debate is scheduled for this week. President George W. Bush has threatened to veto the measure.

The Maryland Democrat said the November elections, which gave the majority in Congress to the Democrats, showed the electorate wanted to "change the tone" in Washington.

"So, we believe even though George Bush is president and we respect that, what we have now is a very clear mandate to move on," Mikulski said.

Embryonic stem cells can become any cell in the body and because of that hold the promise to treat a number of diseases and conditions, including Parkinson's and juvenile diabetes. However, they raise ethical concerns because the embryo is destroyed in retrieving them, although most are obtained from unused embryos from in vitro fertilization.

In 2001, Bush restricted government funding to research using only embryonic stem cell lines then in existence, and there are now 21 lines in use. Bush issued the first and only veto of his presidency last year when he killed legislation that would have expanded federal funding of stem-cell research. In January, the House passed a revived proposal.

Mikulski noted that many private groups and some states have provided stem cell research funding, but that funding can only sustain limited research.

"What we're concerned about is that unless we have a national framework these efforts will not be able to be sustained," and the United States runs the risk of losing researchers to foreign universities and institutions.

"So much of our research will go to China, will go to Singapore, will go overseas. We'll export our knowledge and in many instances our brightest young scientists."