For a prank - a series of rural church fires - during a night of drinking three former college students were sentenced to prison. 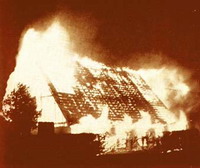 Matthew Cloyd, 21, and Benjamin Nathan Moseley and Russell Lee DeBusk, both 20, pleaded guilty in December to federal arson and conspiracy charges linked to the blazes set over two nights in February 2006.

Cloyd and Mosely were both sentenced Monday to eight years in prison, five years of probation and 300 hours of community service at the burned churches.

They were also ordered to pay $3.1 million (2.3 million EUR) in restitution to the churches that were burned.

U.S. District Judge David Proctor sentenced DeBusk to seven years in prison and five years probation and ordered him to pay $1.9 million (1.42 million EUR) in restitution. He received a lighter sentence because he was not involved in as many of the fires.

All three showed no emotion when the sentence was read. They apologized to the church members and pastors in the courtroom.

In court documents, defense attorneys and supporters of the three said they set the fires as a prank during a night of drinking and illicit hunting.

Five churches were set ablaze in Bibb County about 45 miles (72 kilometers) south of Birmingham on one night. Four other churches were burned four days later in three western counties near the Mississippi line.

All three men admitted being involved in the first five fires. Cloyd and Moseley said they set the later blazes in an attempt to throw investigators off their trail.

Investigators captured the three after linking tire tracks left at the scene to the tires on a sport-utility vehicle driven by Cloyd.

In letters of support to the judge, relatives and friends described the defendants as bright young men who were led astray by alcohol and their peers.

Cloyd was studying to be a physician's assistant at the University of Alabama at Birmingham; Moseley and DeBusk were theater majors attending school on scholarships at Birmingham-Southern College.

All three men also face state charges, and they are due in court in on Thursday for a hearing on whether they will be granted youthful offender status, a move that would lessen their state punishment.

District Attorney Michael Jackson expects the request to be denied. He and other local prosecutors are seeking time in state prison for the three after they finish their federal sentences.