Owing to the fact that all three branches of the politically unstable Andean nation's government sink deeper into legal confusion over the new leftist president's vow to write a new constitution Ecuador's Congress called off meetings for another week. 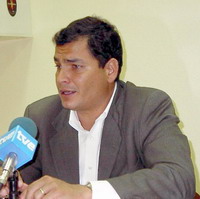 After contradictory court rulings last monthIt it was unclear whether a majority of the country's 100-member legislature is legally in office.

In March, the country's highest electoral court fired 57 lawmakers, accusing them of interfering with a national referendum on the need for a new charter, which has been scheduled for April 15.

The congressmen approved President Rafael Correa's referendum plan in February with the condition that the special assembly to write the new constitution would not be able to close the legislature.

But the election tribunal approved Correa's request that the assembly have unlimited powers, setting off a constitutional crisis.

On Tuesday, congressional president Jorge Cevallos called off what would have been the first session in nearly a month, saying that Ecuador's legal chaos "has worsened." He called a new session for April 10.

Most of the fired congressmen already had been replaced by alternate lawmakers when a provincial judge ruled last week they had been illegally ousted.

Cevallos said he would respect the Guayas provincial judge's injunction.

But on Monday, the president of the Supreme Electoral Tribunal, Jorge Acosta said that the firings remain "in full effect," adding to the political uncertainty that has gripped the country for two months.

Correa, who took office Jan. 15, says he will not respect any decision by Congress or the courts to block the referendum.

Correa, a leftist whose party holds no seats in Congress, which he has called "a sewer of corruption," is pushing for a new charter to limit the power of the country's traditional political parties, which he blames for the country's instability.

He is the country's eighth president in a decade.