Tests have confirmed that bird flu detected in chickens in southern Japan was the virulent H5N1 strain that has caused more than 160 human deaths worldwide, the Japanese Agriculture Ministry said Tuesday. 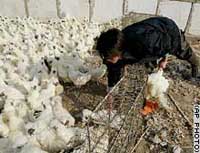 The virus, identified Tuesday by the National Institute of Animal Health, killed about 4,000 chickens last week at a farm in Kiyotake town in Miyazaki prefecture (state).

The institute is still running tests for DNA analysis and more pathogenic details of the virus, including its strength, the ministry said in a statement.

"We must take steps to erase fears among the public, and do our best to confine the outbreak," Matsuoka told reporters before the trip. "We must also make sure to provide accurate and appropriate information to avoid confusion among consumers."

Officials on Monday began to burn all the birds, including the 8,000 remaining birds at the farm they culled on Sunday. Authorities also banned the shipment of eggs and chickens at 16 farms within a 10-kilometer (6.2-mile) radius of the affected farm, where local authorities were to take further disinfectant measures Tuesday.

The Agriculture Ministry also ordered a nationwide inspection of poultry farms to detect any signs of sick birds, and environment officials began a national survey to look into the possibility that a bird flu virus might have been brought by migratory birds from other parts of Asia.

Since 2003, the H5N1 bird flu strain has killed at least 161 people worldwide, according to the World Health Organization. Experts fear it could mutate into a form that becomes easily passed among people, potentially sparking a pandemic.

Bird flu was found in Japan in 2004 for the first time in decades. There has been one confirmed human case involving the H5N1 virus in Japan, but no reported human deaths, reports AP.

Japan also had several other outbreaks of other bird flu viruses not harmful to humans since then, leading to the culling of millions of birds.

The country did not import any poultry meat from Japan last year, but bought nine tons of egg yolks and 650 kilograms (1,433 pounds) of egg powder, according to the Agriculture Ministry in Seoul.