Israel and Syria have reached understandings on a future peace deal between the two countries following a series of secret talks between its representatives, the Israeli daily Haaretz reported Tuesday. 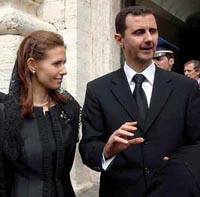 According to the report, Israeli and Syrian officials met secretly in Europe several times between September 2004 and July 2006, reaching a framework for a deal that would include an Israeli withdrawal from the Golan Heights, which it captured in the 1967 Mideast war.

Israel denied any involvement in the reported talks.

David Baker, and official in the Prime Minister's office, said "the Israeli government is unaware of any such meetings."

Former Foreign Minister Silvan Shalom told Israel's Army Radio that he first learned of the talks by reading Tuesday's paper. He said the last contact Israel had with a Syrian representative was in 2003.

Haaretz reported that Israel was represented in the talks by Alon Liel, a former top diplomat, and that former Prime Minister Ariel Sharon was briefed on the meetings and that Prime Minister Ehud Olmert had been informed. The Syrian representative in the talks was Ibrahim Suleiman, an American citizen, who had visited Jerusalem and delivered a message on Syrian interest in an agreement with Israel. The report said Syrian President Bashar Assad initiated the meetings, and that Turkish mediators came the first contacts between the two sides. The Turkish involvement ended in the summer of 2004, when an unknown European took over as the leading go-between.

Official peace talks between Israel and Syria broke down in 2000.

According to the report, Israel agreed to withdraw to the lines of the Sea of Galilee, but would retain control of its waters and those of the Jordan River. A park that will cover a significant portion of the Golan Heights will be set up for joint use by Israelis and Syrians. The border area will be demilitarized along a 1:4 ratio in Israel's favor, reports AP.

According to the terms, Syria will also agree to end its support for Hezbollah and Hamas and will distance itself from Iran.

Haaretz published a text of the agreed upon document, described as a "non-paper," which outlines the understandings but is not signed and lacks legal standing. It was prepared in August 2005 and has been updated during a number of meetings in Europe, the last of which took place during last summer's war between Israel and Hezbollah guerrillas in Lebanon.