A former employee at the University of California, Davis' primate research center said Wednesday that university officials ignored problems that led to the deaths of seven research monkeys in 2004 when a heater malfunctioned. 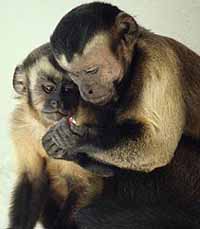 Some of the research center's monkeys were being kept at the university's Animal Resources Service, a separate entity that houses a variety animals.

Cheri Stevens, a former animal technician at the California National Primate Research Center said she was present at the Animal Resources Service building when its ventilation system failed a regular maintenance check.

Stevens said she then urged officials to move the monkeys to the primate center, which has 24-hour environmental monitoring in each room. They did not follow her advice, she said.

Several weeks later, the heater at the Animal Resources Service building blew hot air into the animals' room, raising the temperature to about 115 degrees (46 Celsius).

Stevens was an employee of the primate center who regularly went to care for the monkeys housed at the service building, university spokesman Andy Fell said.

Stevens said she was never interviewed by the Department of Agriculture's investigators, even though she was the first technician to enter the overheated room.

"It's surprising to us," Fell said. "We think the animals have a very high standard of care."

The primate center is routinely inspected by the U.S. Department of Agriculture and is accredited by the Association for Assessment and Accreditation of Laboratory Animal Care, Fell said.

The dead cynomolgous monkeys were breeding monkeys and were not being used for experiments.