China has finished assembling its first lunar satellite probe and is working to design pollution-free rockets, an official said Thursday. 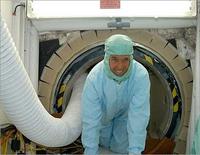 "Smooth progress has been made in research and development of Chang'e I (the probe), and we have completed assembly of the satellite," Sun Laiyan, head of the China National Space Administration, said at a news conference.

Chang'e I is expected to be launched next year "to test the technical feasibility and reliability of our technology," Sun said.

He was speaking at the release of a government report on China's space activities in 2006, the 50th anniversary of the founding of the country's aerospace industry.

The Chang'e I project is part of an effort to land an unmanned probe on the moon by 2010.

Chang'e I, named after a mythical lunar-dwelling Chinese fairy, will orbit the moon at an altitude of 200 kilometers (125 miles) and "will explore the environment and atmosphere between the Earth and the moon," Sun said.

State media say the 2,350-kilogram (5,170-pound) satellite will take three-dimensional images of the lunar surface and analyze its materials.

The report said one of China's key tasks in the next five years is to develop "nontoxic, pollution-free, high-performance, low-cost and powerful thrust carrier rockets." It did not give any other details, or say what kind of fuel it now uses.

In the United States, a rocket fuel ingredient called perchlorate has been found to interfere with thyroid function, reports AP.

China launched its first manned space mission in 2003, becoming the third country to send a human into orbit on its own after Russia and the United States.

The next Chinese manned space flight is due in 2007. Sun said the project was "going smoothly," but did not give details.