Four French tourists taken hostage in Yemen two weeks ago have been released and turned over to French authorities, the foreign minister confirmed Monday. 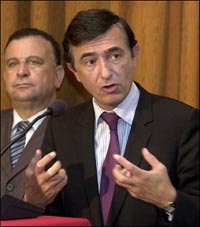 Philippe Douste-Blazy said the hostages were expected to return to France on Wednesday.

"I am in the position to confirm, in the name of French authorities, the liberation of four French nationals," Douste-Blazy told a news conference in Paris. "To my knowledge, they are in good health."

A Yemeni lawmaker who mediated the hostages' release and the Yemeni official news agency reported earlier Monday that they had been freed.

French Prime Minister Dominique de Villepin immediately cheered the release. Neither the French ministers nor Yemeni officials gave details of how the tourists were freed.

The men were captured by the Al-Abdullah tribe on Sept. 10 in Shabwa province, southeast of the capital San'a, as they were headed south to the port city of Aden in a convoy of tourists. Their captors had demanded the release of some of their relatives from prison, reports AP.