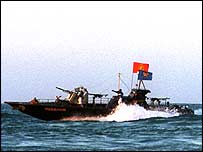 It was one of the largest clashes since fighting escalated in the area in August, and dealt a further blow to a 2002 cease-fire that was supposed to end Sri Lanka's bloody 19-year civil war. The latest fighting began late Sunday night when the navy spotted 25 rebel ships sailing from their northern stronghold south along the eastern coast.

Rasiah Ilanthirayan, military spokesman for the separatists, disputed the navy's claims. He said only three rebel fighters had been killed and none of their boats sunk.

"But we damaged two naval attacking crafts," he said by telephone from the rebel stronghold of Kilinochchi.

Tamil Tigers and the military frequently dispute each other's claims, and independent confirmation is virtually impossible as the areas are closed to outsiders.

The military said it planned to release a video proving it had destroyed rebel ships, reports AP.

Navy Cmdr. D.K.P. Dassanayake said the rebel ships were believed to have been transporting arms and ammunition to reinforce the Tigers near the strategic eastern port of Trincomalee. Some 70 Tigers were killed and around 30 wounded, he said. The navy attacked with gunboats, he said.

The remaining 14 rebel boats retreated after the hostilities just off the coast of the eastern town of Pulmoddai, about 225 kilometers (140 miles) northeast of the capital Colombo, he said.

One navy vessel was damaged, and five sailors wounded, but the boat made it back to port, he said.

An officer at the Defense Ministry's press office said the third in command of the Tigers' sea wing, known by the single name Seliyan, may have been killed in the battle.