After several delays, a private, space-bound rocket is set to launch Monday from a southern New Mexico spaceport, marking what company officials say will be the first time the public has "direct access to space." 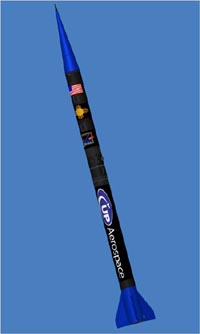 The scheduled launch of a SpaceLoft XL rocket from Spaceport America in Upham, New Mexico, is among the first from a commercial spaceport in the United States and will hurtle about 50 experimental and other payloads about 70 miles (113 kilometers) above the Earth for a 13-minute suborbital flight.

The Upham launch site is also the planned home of a state-built $225 million (Ђ175.6 million) spaceport. British billionaire Sir Richard Branson has also selected the site as headquarters of his space tourism company, Virgin Galactic, which hopes to launch flights from the spaceport by the end of this decade.

The rocket is not the first to be launched by the Connecticut-based UP Aerospace. Its SpaceShipOne was the first privately manned rocket to reach space in a 2004 suborbital flight from California's Mojave Desert Airport.

Several other UP Aerospace flights have been scheduled for later this year, including an Oct. 21 flight that is expected to carry the ashes of James Doohan, who gained worldwide fame for his portrayal of chief engineer Montgomery "Scotty" Scott on the original "Star Trek" TV series, Mercury astronaut Gordon Cooper, and several other people.

Knight said payload space on one of his rockets range in price from a few hundred dollars to tens of thousands of dollars, depending on the size. Each SpaceLoft XL rocket can hold about 110 pounds (49.5 kilograms) of cargo, reports AP.

The rocket to be launched Monday is expected to land at White Sands Missile Range, about 33 miles (53 kilometers) northeast of the Upham launch site.