Ford chairman: Automaker much change way it does business

In an e-mail to employees, Ford Motor Co. chairman and chief executive Bill Ford discussed a three-pronged approach he is taking in leading a turnaround effort at the No. 2 U.S. automaker. 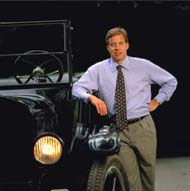 Ford chairman: Automaker much change way it does business

A copy of the memo sent Friday by Ford was obtained by The Detroit News, which published details of it Saturday. A spokesman for the Dearborn-based company on Saturday provided a copy to The Associated Press.

"The business model that sustained us for decades is no longer sufficient to sustain profitability," Ford wrote.

"We must change to a new business model that requires greater bottom-line contributions from cars and crossovers, continued leadership in pickups in North America, healthier profits from all other business units, growth in Asia, greater integration of our global operations and an evaluation of strategic alliances."

Ford said he has organized his approach to solving the company's problems by focusing on three areas: accelerating its North American turnaround effort, leveraging its global assets and leadership.

"It is important to note that all of the issues that some onlookers view as 'problems' for our company are issues that I view as opportunities," Ford wrote.

In July, Ford pledged to speed up and possibly deepen its North American turnaround plan.

Ford's "Way Forward" plan, launched in January, calls for shedding 25,000 to 30,000 jobs and closing 14 plants by 2012 to help return its North American automotive operations to profitability.

The company may offer buyouts and early retirement packages to more of its production workers to reduce its hourly work force. Details on further cuts are expected after a Sept. 14 board meeting, reports AP.