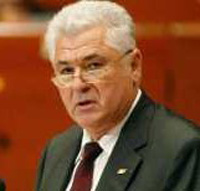 Voronin's office gave no details about what was on the agenda for the Moldovan president's meetings in Russia.

Russian newspaper Kommersant reported Monday that Voronin made a proposal to Putin in July to normalize relations strained by a dispute over a pro-Russian separatist enclave in Moldova.

Ties between the two nations deteriorated after Moldova rejected a Russian plan in November 2003 that would have given the separatist region of Trans-Dniester almost full independence, the AP reports.

The last time Voronin was in Moscow to meet Putin was in February 2003.