U.S. blocks assets of Belarus president, prohibits business with him

The United States moved Monday to clamp down financially on Belarus' authoritarian President Alexander Lukashenko as well as other government officials. 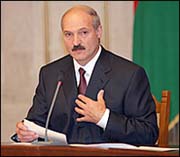 U.S. blocks assets of Belarus president, prohibits business with him

The Treasury Department added Lukashenko to its list of specially designated nationals, meaning that any assets belonging to Lukashenko found in the U.S. must be blocked and Americans are forbidden from doing business with him.

Lukashenko, who has been in power since 1994, is often branded by Western countries as "Europe's last dictator." He won a third term in March 19 elections deemed fraudulent by Western governments.

In February, the Bush administration linked Lukashenko's government to the murders of a pro-democracy businessman and an independent journalist.

"These sanctions, imposed in coordination with targeted financial sanctions adopted by the European Union indicate the international community's intention to hold to account those responsible for abuses in Belarus," the White House said in a statement explanining the move.

It said the United States will continue to gather and review information regarding possible additional targets, reports AP.