Chinese authorities accuse Lai of being the mastermind behind a Xiamen-based network that smuggled as much as US$10 billion (Ђ7.8 billion) worth of goods with the protection from corrupt government officials. Beijing claims the smuggled goods included cigarettes, vehicles, heating and cooking oil, textiles, chemicals and other raw materials. 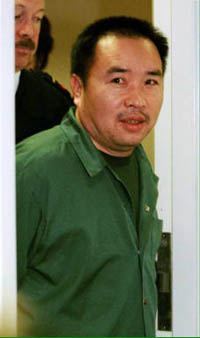 Lai, his wife Tsang Mingna and their three children arrived in Canada in August 1999 after fleeing China and applied for asylum. They said the refugee board that initially turned down their asylum claim overlooked the nature of political persecution in China.

Lai was scheduled to be deported last Friday, but won an appeal hearing by the Federal Court in Ottawa. While remaining under house arrest in Vancouver, his lawyers were to argue in court Wednesday that Lai would surely face torture or execution if forced to return home, the AP reports.

Eight people connected to the case have already been executed in China and several people, including Tsang's mother, have been jailed for sending Lai funds for his defense.

In 2001, then-Chinese President Jiang Zemin sent former Canadian Prime Minister Jean Chretien a diplomatic note with assurances Lai would not be executed if returned to China.

Beijing has pledged that Lai would receive a fair trial, a must, as Canadian authorities are technically bound by laws that protect refugees from being deported to countries whose judicial systems apply torture.