Bird flu killed a 15-year-old boy in Indonesia, a health official said Wednesday citing local tests, as the country struggled to get a grip on a spike in cases. The latest victim was rushed to a hospital in the city of Bandung on Monday and died a day later, said Hariyadi Wibisono, director of communicable disease control at the Ministry of Health. Local tests came back positive for the H5N1 bird flu virus, but still need to be confirmed by a World Health Organization reference laboratory in Hong Kong, he said. 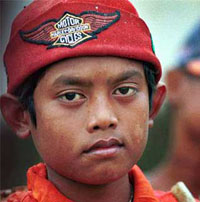 The boy, from the West Java town of Tasikmalaya, had a history of contact with poultry, he said. He is the third recent victim from the province. Last week, a 10-year-old girl and her 18-year-old brother who lived in another village died of the disease. Sick and dead birds were reported near their home. Bird flu has killed at least 127 people worldwide since the virus began ravaging Asian poultry stocks in late 2003. Nearly a quarter of the human deaths have been in Indonesia, which has an official tally of 36, including at least a dozen in May alone.

A family cluster in North Sumatra has attracted international attention. That case involves six of seven relatives from the tiny farming village of Kubu Simbelang who died after being infected with the H5N1 virus. An eighth family member was buried before samples were collected, but WHO considers her part of the cluster the largest ever reported.

Experts have not been able to link contact between the relatives and infected birds, which has led them to suspect limited human-to-human transmission may have occurred. However, no one outside the family of blood relatives no spouses has fallen ill and experts have said the virus has not mutated in any way. Scientists believe human-to-human transmission has occurred in a handful of other smaller family clusters, all involving blood relatives. Experts theorize that may mean some people have a genetic susceptibility to the disease, but there is no evidence to support that.

The lone survivor of the family cluster is recovering in a hospital in Medan. The disease remains hard for people to catch and most human cases so far have been traced to contact with infected birds. But experts fear the virus will mutate into a highly contagious form that passes easily among people, possible sparking a pandemic. They stress, however, that has not happened in Kubu Simbelang, reports the AP.