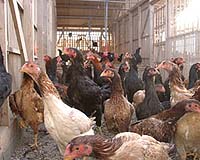 Minister Gheorghe Flutur said a chicken in the major city of Brasov tested positive for the virus late Wednesday. Tests for the virus were also being conducted in 27 other communities, he said.

The latest outbreak of bird flu was discovered over the weekend at the Drakom farm in the central town of Codlea, prompting authorities to recall 220 metric tons of meat from stores nationwide and cull all the birds in 20 communities where live birds from the farm were sold.

Two men and two children from Codlea were sent by ambulance to a Bucharest hospital for testing after showing symptoms of a cold or flu. They were hospitalized and tested for bird flu because they could have come into contact with dead birds, Colentina hospital director Adrian Streinu-Cercel said. He said preliminary test results were expected Friday, the AP reports.

So far, no human cases of H5N1 have been discovered in Romania, the AP reports.

The infection at Drakom is the first in an industrial-size farm. Since October, Romania has had dozens of cases of bird flu in household farms.

Prosecutors detained Thursday a Codlea vet who oversaw local farms, along with the owners of the Drakom farm and the nearby Pati Prod farm, on charges of spreading disease. The three are accused of failing to promptly to inform authorities that chickens were dying in large numbers on the farms.