A senior U.S. diplomat said Tuesday that he had talked with Chad's president about postponing presidential election that are just eight days away. 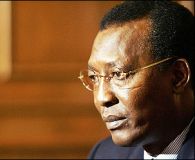 Deputy Assistant Secretary of State for African Affairs Donald Yamamoto, who met with President Idriss Deby Monday, said that they discussed the poll and a rebellion in eastern Chad that saw a failed April 13 attack on the capital, N'djamena, in which the government says 350 died.

"We held a very direct and private discussion on the issue" of whether to postpone the election, Yamamoto told journalists.

Chad's main opposition alliance is boycotting the May 3 poll, which would be Chad's third multiparty presidential election since independence from France in 1960. The opposition says it believes Deby will steal the election.

Deby seized power by force in 1990. Deby won Chad's first multiparty presidential poll in 1996 and a subsequent 2001 election. Critics say neither vote was free and fair, and Deby's claims of being a democrat were further undermined when he pushed for a national referendum last year to change the constitution to allow him to run for a third term. The amendment passed after an opposition boycott.

Some opposition leaders have said the May 3 election should be held later to allow proposals for electoral reform to be implemented.

A group of non-governmental organizations has called for a national round table to thrash out Chad's most urgent problems, including electoral reform, before people go to the polls.

Deby said last week that it would be dangerous to postpone the election because it would create a constitutional vacuum.

With the opposition splintered and weak, hopes for ousting Deby may rest with the rebellion, which has been brewing since October and has been bolstered by scores of army defectors.

In February, two generals who are relatives of Deby joined the rebels. Two of the president's nephews who were responsible for the country's oil program also have joined the opposition.

The presidency has historically changed hands only by force in Chad, and the competition for power has become more intense since the country began exporting oil in 2004.

Yamamoto was dispatched to talk with Deby about how the country spends its newfound oil wealth, following a dispute that has the government threatening to shut off oil supplies by the end of the week.

Chad exports 160,000 barrels of oil a day through a U.S.-Malaysia consortium including Exxon Mobil, Chevron and Petronas. But it's still among the poorest countries in the world, even though it began exporting oil in October 2003, reports AP.