Jordan said Tuesday it was cancelling a visit of the Palestinian foreign minister because activists of his Hamas party had been smuggling missiles and other weapons into the kingdom. 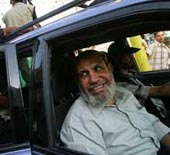 Government spokesman Nasser Judeh said Zahar's visit, which was planned for Wednesday, had been "put off until further notice."

He told The Associated Press that "missiles, explosives and automatic weapons were seized in the last couple of days."

Hamas activists had managed to smuggle "such dangerous weapons into the country" and store them, he said.

He declined to say whether the activists had been arrested.

Zahar is the most senior Hamas leader in the Gaza Strip.

In a separate statement to the official Petra news agency, Judeh said Jordanian security services had observed Hamas activists "exploring several vital (potential) targets" in the capital, Amman, and other cities. He did not elaborate.

Jordan, which signed a peace treaty with Israel in 1994, maintains a tough line on militants and once expelled the current leader of Hamas, Khaled Mashaal, for his activities.

Jordan and Egypt have called on Hamas to accept the Arab peace plan, which entails full recognition of Israel in exchange for full withdrawal from territory captured in the 1967 and 1973 Arab-Israeli wars.