Palestinian Foreign Minister Mahmoud Zahar embarked Friday on a fund-raising tour of Arab nations as the new Hamas-led government struggles to find new sources of money to fill its bankrupt treasury. Zahar's two-week trip was to include stops in Egypt , Jordan , Saudi Arabia , Bahrain and Kuwait . 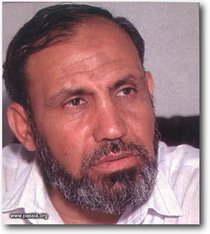 The trip "is part of opening new windows and doors for the government, specially to get political and financial support," said Ghazi Hamad, spokesman for the new Palestinian Cabinet. "It is an attempt to break the international isolation (on the government)."

After Hamas won Palestinian parliamentary elections in January and formed a Cabinet last month, Western nations cut funding to the Palestinian Authority. Hamas, which calls for Israel 's destruction, has refused to meet Western demands to renounce violence and recognize Israel 's right to exist. Israel has also suspended the transfer of about US$50 million (41.34 million) in monthly taxes it collects on behalf of the Palestinian government, reports the AP.