Gold and silver futures soared Monday to their strongest levels in more than two decades, boosted by geopolitical concerns and a sharply softer U.S. dollar. 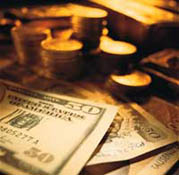 "There are many upward pressures on gold that continue to take it higher, like the deficit, the weakness of the dollar and additional Iran threats. The path of least resistance is up," says George Gero, vice president with RBC Capital Markets Global Futures.

Several traders cited ongoing concerns about Iran's nuclear program and concerns about whether the United States would launch an attack. Iran has said it would go ahead with plans to enrich uranium, defying the United States, Europe and United Nations nuclear experts. Iran has said its nuclear ambitions are peaceful, but Western countries fears it plans to arm itself with nuclear weapons.

Also pushing up gold prices Monday, the dollar tumbled after reports that China could reduce its buying of U.S. Treasury products.

There was also speculation that the Federal Reserve may finish its rate-increase cycle sooner than expected.

A weaker dollar tends to push gold higher because gold, denominated in the dollar, is regarded as an alternative investment to the U.S. currency.

Also, May crude oil was up 68 cents to $70 a barrel in afternoon trading on the Nymex. Stronger energy prices usually support precious metals.

Bernard Hunter, director of precious metals at Scotia Mocatta, also cited geopolitical concerns, but added that some physical buying has emerged in India as participants get used to $600 gold and perhaps stop waiting for a pullback to present a buying opportunity, reports AP.