Finally, Bill Clinton can joke about his past. 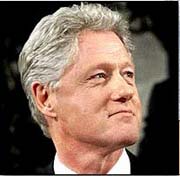 The former president cracked up a meeting Wednesday, spicing up an otherwise dry, technical talk on the need for better coordination of global relief work.

In the midst of touting the importance of creating infrastructure to deliver aid to the developing world, Clinton conceded it was hardly the most scintillating subject to which he's been linked.

"To me, it's something I want to keep working on and I like working on it because it's not a particularly sexy topic. But I've already had enough headlines to last me five lifetimes," said Clinton, as the banquet hall audience burst out laughing.

"I don't mind working on boring topics. I like boring," he said in a speech to InterAction, an alliance of humanitarian organizations.

In recent days, Clinton has poked fun at his post-White House life working on global disaster relief and HIV/AIDS programs.

He's also shown a willingness to mock the days his presidency was consumed by the Monica Lewinsky scandal and impeachment.

At a speech Tuesday night, the 42nd president genially said he had "already made enough people mad in my life," and on Monday evening he had described himself to a New York crowd as "the world's most famous sinner."

Clinton also spoke Wednesday at a gathering where he was honored with an award named after his one-time boss, the late Sen. William Fulbright of Arkansas.

Accepting the prize, Clinton urged the United States to seek peace before war.

Clinton avoided discussing the current conflict in Iraq or the growing U.S.-Iran tensions, but he argued that Fulbright's approach to the escalating war in Vietnam is an important lesson for present day politicians.

"In this interdependent world, we should still have a preference for peace over war," he said, reports AP.