Former U.S. President Bill Clinton's attempt to marshal the resources of the world's wealthy and influential to solve global problems resulted in US$2.5 billion in pledges during a signature conference held last year. This year, he wants even more. 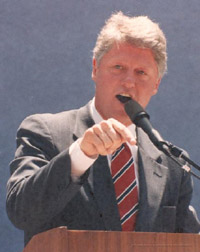 On Friday, the former president is scheduled to unveil details of the 2006 Clinton Global Initiative and to discuss progress made on commitments from the September 2005 gathering. He will be joined by Nigerian President Olusegun Obasanjo and New York City Mayor Michael Bloomberg for the announcement. "I was astounded by the number of people who have been spurred to action by CGI," Clinton said in written statements Thursday. "People really want to help, and now that many people know what CGI is and what we're trying to do, we're hoping for even greater success this year."

Clinton spokesman Jay Carson said there has been good progress on last year's commitments, which kept coming in even after the three-day conference ended, and that although some people who made pledges were having problems, there was plenty of time for them to come through. This year's gathering is set for Sept. 20-22 at the Sheraton New York Hotel & Towers. Microsoft founder Bill Gates, investor Warren Buffett and French President Jacques Chirac are expected to attend. Primary areas of focus will include poverty, public health, energy and religious conflict.

Admission price? Same as before: US$15,000. On Thursday, Clinton representatives gave The Associated Press a sampling of progress on some of the more than 300 plans that resulted from the 2005 session. Among them: three female philanthropists and a group called Vital Voices Global Partnership have collected nearly US$170,000 to help women in the Middle East gain business skills, with a workshop planned for later this year in Jordan; a doctor hoping to get medical supplies to needy parts of the world has gained the support of the World Health Organization and the Cardiovascular Research Foundation in an initiative valued at US$500,000 a year; and Deutsche Bank has launched a US$75 million microfinance consortium.

Carson said Thursday that all three of those commitments were being met, and that more details would be available later. The former president said in 2005 those who did not make good on their financial promises would not be invited back this year. Carson would not say which pledge-makers were having problems, but did say that Clinton 's staff is helping to find ways to fulfill their pledges.

Commitments already are rolling in for 2006, including a US$5.5 million promise from the Global Consumer Group at Citigroup to expand microfinancing efforts in 25 countries. Last year's gathering attracted some 800 people, including numerous well-known figures such as King Abdullah of Jordan, former Vice President Al Gore and singer Barbra Streisand. U.S. Sen. Hillary Clinton, the former president's wife and a potential 2008 presidential candidate, also attended, reports the AP.