Some 2,000 angry students massed on railroad tracks in Paris Thursday, stopping international train traffic in a new push to force a contested youth labor law off the books. But France's equally combative prime minister refused to say whether the measure would be repealed. 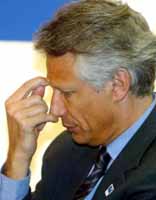 Dominique de Villepin, calling for calm, spoke more clearly about his own destiny, brushing off growing speculation that he would resign.

President Jacques Chirac "gave me a mission, and I will lead this mission to the end," Villepin told a news conference. "All the rest is pure speculation and fantasy."

Stepping up wildcat disruptions with high-profile protests, students set up a pre-dawn blockade that stopped a convoy of parts for the Airbus A380 jumbo jet, the crown jewel of European aviation, reports AP.

According to Ireland Online, some 200 police in riot gear moved them out, allowing thousands of passengers packed into the station to start their travels.

Protesters earlier occupied the tracks of another Paris station, the Gare de l’Est, for an hour. In the eastern city of Strasbourg, several hundred students blocked the Pont de l’Europe bridge that links France and Germany.

“This is very irritating, but I can understand it,” said John Ring, a 40-year-old French businessman at the Gare du Nord who was trying to get to The Hague. “What I can’t understand is how the government would allow the situation to get to this point.”
While continuing to justify the reasons behind a reform aimed at denting sky-high joblessness among the young, Villepin said he was listening to the voices of discontent.

As the crisis over the jobs law that gained steam in mid-March rolled on, MPs from the governing UMP party met for a second day with unions and students in search of a way out. Protesters are demanding the measure be withdrawn.

"The immediate priority, as we all know, is restoring calm," Villepin said. "It is time to get out of the crisis," he said, adding that classes should resume ahead of exams.

The jobs law, which aims to encourage hiring by making it easier to fire youths, has inspired disruptive protests at hundreds of universities and high schools and spurred massive demonstrations that have ended in violence by a few troublemakers.

French Prime Minister Dominique de Villepin said he's willing to consider all proposals to end the stalemate on a disputed labor law. He fell short of saying it will be repealed, as unions are demanding.

"We have to open a dialogue without no a priori and no taboos,'' said de Villepin, speaking at his monthly press conference today. "What we want and is essential is to win the battle of youth employment. Let's talk about it. I am ready to hear all proposals on the table.''

The law, known as CPE, has driven millions of workers and students to the streets in protests across France. De Villepin says it's aimed at cutting unemployment of more than 22 percent among the young. Students and unions say it reduces job security. France's labor unions gave the government an April 17 deadline to withdraw the CPE after meetings with lawmakers and ministers yesterday, informs Bloomberg.