Hundreds of thousands of French poured into the streets Tuesday, in the latest, and largest, demonstration against an unpopular new employment law. The protests included a national strike that disrupted transportation and other services around the country. 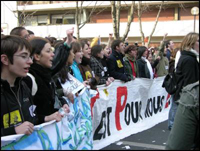 Chanting slogans and waving banners against the new hiring law, tens of thousands of demonstrators marched through the Paris streets Tuesday, ending up at the Place de la Republic in the northern part of the city. Similar marches were held in towns and cities across France. Striking workers disrupted public transportation, rail and airline services around the country. Teachers, postal workers and private sector employees also joined the walkout.

Those protesting the jobs law included Artur Cosnefoy, a 17-year-old high school student from the Paris suburb of Nanterre.

"The jobs law, known here as the first employment contract, is bad for French society. You can see the malaise here," he said. "The law needs to be changed."

Passed earlier this month, the new legislation allows businesses to more easily hire, but also fire, young workers during the first two years of their employment. French Prime Minister Dominique de Villepin, who spearheaded the legislation, argues it will help reduce high youth unemployment. But many youngsters say it will only increase job insecurity.

The protests have gone on for weeks at French universities and schools and are influencing the French population at large. A series of polls show most people oppose the jobs legislation in its current form. And at the Paris demonstration, parents like 40-year-old Hishem Larach said they did not want their children facing an uncertain future.

"Its not a question of unemployment. Businesses do not have confidence in our youngsters," he said. "The government should force them to give French youths greater internships and other opportunities,"reports Voice of America.