The number of endangered Sumatran elephants in parts of Indonesia has dropped by 75 percent in the past six years, raising the possibility they could become extinct in the near future, an environmental group said Wednesday. WWF Indonesia said in a report that the decline in Riau province on Indonesia 's largest island of Sumatra is mostly due to the rapid conversion of forest habitat into palm oil and paper plantations. As a result, conflicts between humans and elephants have risen, with 45 elephants either shot or poisoned since 2000 and 16 people killed by the jumbo beasts, the group said. 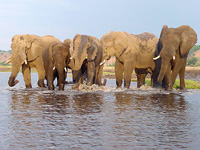 Hundreds more elephants were captured and removed from forest areas, often dying in captivity, WWF, also known as World Wildlife Fund, said. The remaining populations number less than 400 in Riau, down from 709 in 1999, it said. "This escalating situation not only spells disaster for elephants, but is also a huge problem for Riau's local people," WWF said in a statement. "Without improved management, it is likely (the elephants) could face extinction in another five years."

WWF called on the Indonesian government to triple the size of the Tesso Nilo National Park to 100,000 hectares (247,100 acres) while increasing the numbers of teams known as Tesso Nilo Flying Squad which help avert conflicts between elephants and humans. Currently, there is one team working in Riau and another three are planned. A squad consists of four rangers with noise and light-making devices, a pickup truck and trained elephants who drive wild elephants back into the forest if they threaten to enter a village.

"This has been proven to be very effective to reduce losses suffered by local communities near Tesso Nilo," Nazir Foead, WWF-Indonesia's Director of Policy and Corporate Engagement, said in a statement. Meanwhile, a coalition of Indonesian non-governmental organizations know as Eyes of the Forest launched a feature on its Web site Wednesday that allows viewers to track elephant and human deaths, the loss of forest cover in Riau and the movement of the 16 elephant herds living there. It said the aim of the mapping service is to put pressure on the government to limit the expansion of plantations in the province by exposing the levels of destruction, reports the AP.