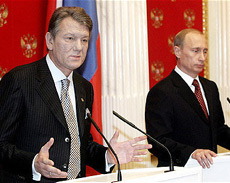 "In this connection, the Russian president underlined Russia 's readiness for close cooperation with the president and the new Cabinet of Ministers of Ukraine that will be formed according to the results of the election," the press service said. The pro-Russian Party of the Regions of former Ukrainian Prime Minister Viktor Yanukovych won the largest chunk of votes in the parliament, according to the official but as yet incomplete count, reports the AP.