President George W. Bush announced the resignation of his chief of staff on Tuesday after a sharp decline in his approval ratings and calls from Republicans for a shake-up at the White House. 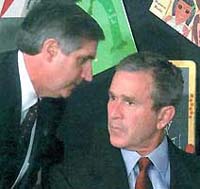 Bush replaced Andy Card with budget director Joshua Bolten, who has extensive experience both in Congress as well as the White House.

"Josh is a creative policy thinker," Bush said. "He is an expert on the budget and our economy. He is a man of candor and humor and directness. No person is better prepared for this important position."

The move came as Bush is buffeted by increasing criticism of the drawn-out war in Iraq and as fellow Republicans have suggested pointedly that the president bring in new aides with fresh ideas and new energy.

A recent AP-Ipsos Poll found that Bush's job approval has dipped to 37 percent, his lowest rating in that poll. Republicans fear the low ratings will hurt them in congressional elections in November, possibly costing them control of both chambers of Congress.

Bush has been fiercely loyal to his aides and changes in the top ranks of the White House have been rare. He announced the changes in a nationally broadcast appearance in the Oval Office, reports AP.

According to Washington Post, sacrificing Andy Card, his longtime chief of staff, is President Bush's way of responding to the growing complaints about the administration's competence.

The botched response to Hurricane Katrina, the deteriorating situation in Iraq, the rocky relations with the Republican Congress -- all of these are seen at least in part as failures of execution. And execution is the chief of staff's job.

But Card's departure in no way addresses the two even more fundamental areas where Bush is vulnerable: His decisions and his credibility.

In most White Houses, the chief of staff is a godlike figure, putting his stamp on the presidency in almost every conceivable way. But in the Bush White House, political guru Karl Rove and Vice President Cheney loom much larger and have way more to do with what the president says and does than Card ever did. As long as they stay put, the rest may largely be window dressing.

Card was extremely popular with his staff and oversaw the most buttoned-down, leak-proof, on-time, on-message White House in history. But he was not a big influence on Bush. He was more like Bush's nanny.