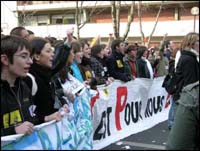 As police prepared for trouble during Tuesday's protest marches, Prime Minister Dominique de Villepin and opponents entered a crucial week in their standoff over the measure meant to encourage hiring, in part by making it easier to fire.

Widespread disruption to train, plane and subway traffic were expected.

In a renewed effort to break the standoff, Villepin on Monday made a new offer to meet with students and unions Wednesday, a day after the protests, "to advance and get out of the current crisis."

The unions who want the measure withdrawn before any talks quickly refused the offer to "improve" it. As of Monday night, the only student union to accept was one known for its rightist positions, not considered representative of the student masses.

A day before the demonstrations, two cars were set on fire during a Monday protest in front of a high school in Seine Saint Denis, police said. The suburban Paris region was the focal point of autumn unrest that spread across France.

Unions for national trains operator SNCF urged rank-and-file workers to walk off the job starting Monday evening. The one-day strike was expected to swell to full force as other unions join in Tuesday, when an estimated 200 demonstrations were expected across the country, with the largest winding through Paris. Most protests in the capital have turned violent.

The week was shaping up as a critical test for Villepin, who has refused demands to withdraw the labor law, which he insists is needed to bring down sky-high youth unemployment rates. Many opponents fear it will damage coveted job security in France.

Labor and student groups vowed to press ahead with the strike and more protests unless the government cancels the law, which has sparked violent clashes with police and shut down universities, reports AP.