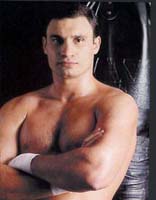 "I tried to be the leader ... that was my aim," Klitschko said in remarks broadcast on Ukraine's TV5. "But it is important to know how to win and how to lose."

The 34-year-old retired boxer, who was making his first ever bid for public office, turned up at a news conference to publicly offer his congratulations to Leonid Chernovetskiy.

Early results showed Chernovetskiy, a lawmaker, winning with more than 30 percent of the vote, ahead of the two-term Mayor Oleksandr Omelchenko and Klitschko, who both hovered around 22 percent, Ukraine's Interfax news agency reported.

Klitschko, a supporter of President Viktor Yushchenko, also appeared to have lost a simultaneous bid to enter parliament as early results suggested his party had failed to make it over the 3 percent barrier.

He retired from boxing in November after hurting his knee in training and pulling out of a defense of his heavyweight title, reports AP.