Vitaly Klitschko: 'I am not going to sell my principles for $8 million'

These days the weather is a lot hotter in Los Angeles than in Moscow. That is probably the reason why Vitali Klitschko sounded more optimistic on the phone than in real interviews. Vitali is very busy currently: he has lots of things to do aside from boxing. He seems to have already come to terms with life that goes on outside the ring he had to abandon. 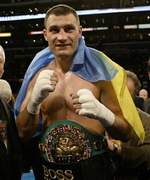 “I heard a nasty crackling in my knee when I was on the eighth round of a sparring fight last Thursday. It is understood I had to call it a day. Doctors first attached a special strong analgesic to my knee. I had to wear a special support bandage for the next sparing fight. Anyway, I could not move around freely. Then we had a meeting in our camp and decided to suspend the training temporarily,” said Vitali.

It was a difficult decision for Vitali to make. We still can not put up with the loss of the beautiful confrontation: Klitschko vs. Rakhman. It really hearts to hear stupid comments by Don King and Hasim Rahman who want to convince everybody that Vitaly is simply afraid of fighting, his injury is a hoax. Breaking a cross-shaped ligament is a pretty widespread injury in the world of sports. Unfortunately, it sounds like a death sentence.

“There was an option for you. You cold have taken part in that fight and make big money (in professional boxing boxers are paid handsomely regardless the outcome of a fight), couldn't you?”

“The doctor said I could barely last a round with the knee like that. Besides, I have my principles and I am not going to sell them even for $8 million.”

“What are you going to do next? There is a rumor that you will become a politician, is it true?

“It is just impossible to keep away from politics in Ukraine where life is overpoliticized. Being an adviser to the president on issues related to sports, I deal with a plenty of social and sports projects including international ones.”

“Who do you think can be the world champion now?

“All the boxers in the rating are tough fighters. However, I hope my younger brother Vladimir could be the champion. Moreover, I believe his potential is greater than mine. He is able of turning into a real champion.”

“Any chance you could come back?”

“Never say 'never.' I would say it could happen one day but it looks unlikely at the moment. I will come back only if Lennox Lewis does the same and agrees to fight me. He is the only competitor who matters to me," Vitali Klitschko said.