Bush: It's time for Iraqi leaders to form unity government

President George W. Bush said Wednesday he feels Iraqi political figures need to urgently get a representative government together that can unify a nation now embroiled in civil strife. 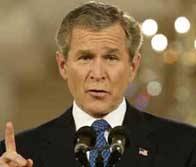 Bush: It's time for Iraqi leaders to form unity government

Speaking for the third time in as many days about Iraq and the war against terrorism, he also said it is important for Iraqi security forces to begin taking the lead in the fight for their future.

"It's the Iraqis' fight," the president told an audience here. "These troops that we're training are going to have to stand up and defend their democracy."

"We expect them to honor the universal principle of freedom," Bush said at Capitol Music Hall, an ornate theater downtown. "I'm troubled when I hear, deeply troubled when I hear, the fact that a person who converted away from Islam may be held to account. ... I look forward to working with the government of that country to make sure that people are protected in their capacity to worship."

"We removed the Taliban from power, we've denied al-Qaida safe have and that young country, that young democracy is now beginning to grow. Twenty-five million people are liberated as a result of the United States defending itself," Bush said.

He acknowledged, however, that there was more work to be done, reports AP.